Even though the release of the new James Bond film ‘No Time to Die’ has been postponed for the SECOND time this year, there’s no need to lose our suave altogether.

In fact, here at TR HQ we are always in the mood for a bit of Bond. So when ITV and Joe Swash came along to film some sequences for the latest competition on the flagship afternoon show ‘Loose Women’ we couldn’t wait to release our inner spies!

Dressed to impress in a tuxedo Bond would be proud of, Joe Swash certainly looked the part as he strolled along the London Eye Pier with the film crew. Fresh from filming driving an Aston Martin around the streets of London and a high end cocktail bar (shaken… not stirred) the excitement only grew when Joe realised his next piece would be delivered on board one of London’s #1 speedboats.

It is probably fair to say Mr Swash was a little less ‘undercover’ than Mr Bond. The first thing our secret agent noticed was the on-board stereo system, immediately turning it up to full volume and blasting out ‘Girls Just Wanna Have Fun’ and dancing around the deck. He may not be the most subtle of spies, but he certainly is the most fun!

Once out on the water though it was time to get to work, taking the film crew to the many ‘Bond' locations across the river, Joe delivering various pieces to camera and finishing with some high speed action outside MI6. Once we wrapped we all felt a bit closer to the legend of Bond.

We’ll have to wait until next April (hopefully!) for the release of the latest Bond adventure, but in the meantime check out the final cut of our time with undercover agent Joe Swash, and keep your eyes peeled next week for a special 'Licence to Thrill' offer - shhh.. it's top secret!

You can also find out more about our filming services on the river Thames. 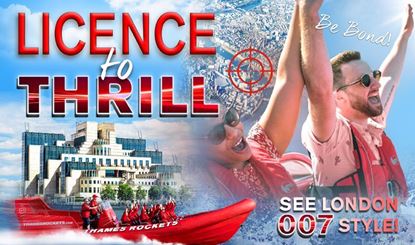